The title “City of Choice” above is the marketing slogan for the City.  Pietermartizburg has, over the last few years experienced a slow decline resulting in the municipality going into administration.  We all await the changes the new administration promises.

I was born in Pietermaritzburg, have moved away a number of times and always returned. It is a great place, great weather, in the country and is the capital city of the province.  Nothing is permanent and things have changed in the last couple of years.  Areas of the city, once slick and efficient have become run down and soiled. What seemed important to people 10 years ago is less so to others now.  Pride in the city has been replaced by turning your head to what you don’t like and missing the potholes.  A while ago Doug Morton (www.douglasimages.co.za) posted some photographs taken at the old Pietermaritzburg railway station. This is one beautiful building. Built with the well known Pietermaritzburg red brick in beautiful Victorian style this is where Mahatma Ghandi was thrown off the train in 1893. I saw Dougs photographs and said that we had to go back. He agreed and this Sunday we visited the station very early.

The detail on the building is incredible. The signage is from another era, the clock, stuck on 12h00 is huge and suspended from the roof in a teak box, the brickwork and glasswork is wonderful to see. Then there are the areas of decay, not 500m away. Here rubbish and sewage are seen everywhere, old damaged containers overgrown with weeds litter the place. Old brick buildings no longer have roofs and the infrastructure has been vandalised. In the station building the lovely building has been brought into the modern era with the introduction of razer while on the stairs and palisade fencing to guide people around. This first post shall be of the old abandoned area that we visited first. The filth was incredible, sewage running down the road and millions of rand worth of infrastructure vandalised, abandoned or abused. We arrived very early to a very harsh sky. I noted to Doug that the land and the sky were about 3 stops apart. That said we got stuck in.

While walking down among the old sheds I noticed a wooden wall burned black. There was all sorts of old ironwork on or near it but what tickled me was the sign advising people not to smoke in the shed!!! 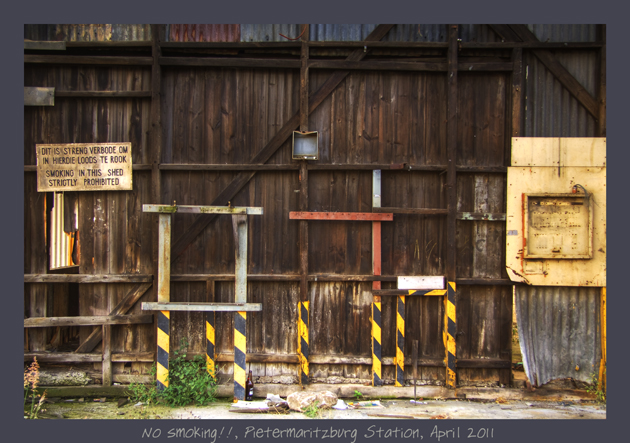 And now a few shots of the damaged and vandalised infrastructure, the first is what greeted us, a large very well lived in (???) shed.  Rubbish and other matter was everywhere and the smell of sewage hung in the air. 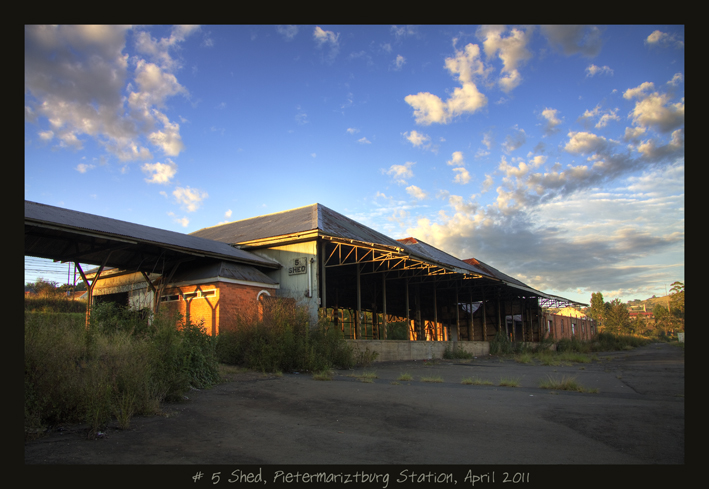 Directly behind us was the old toilets, roof broken, toilets ripped out.  There was a very good looking Aloe bainsii to cheer the shot up.

And then there was the local Villa, I nearly stood on a rather grubby lad in this building, As I walked by a pile of carpets one lifted up and a head popped out to see what was going on.  By the colour of his eyes the last thing in the world he wanted to see was someone with a camera so he pulled his head back in and remained there for the rest of our stay.  The place had been badly vandalised and I have no idea where the all important control valve has gone……….

People live here, enough said.  The fluid in the front is raw sewage.

Another view of the “home”

The next post shall be of the inside of the station, not nearly as depressing as this one so watch this spot in a few days. I also suspect that Doug will have pics up later and he got some good stuff so visit www.douglasimages.co.za .

This entry was posted on April 11, 2011 by Simon Joubert AFROmacro. It was filed under city of choice, pietermaritzburg, south africa, stations, trains .